We are vey excited to now be offering CBD oil! We've done extensive research looking for the perfect fit and we found it with LabCanna and their CBD full spectrum and isolate oils. They are grown organically, here in Tennessee and have a great track record for consistent potency. We are carrying these two formulas in our retail store.
​
Ask us about our new CBD Massages and Facials! They're amazing!
Now offering LabCanna Topical balms!
New CBD Balm Topicals from TenneCBD™ 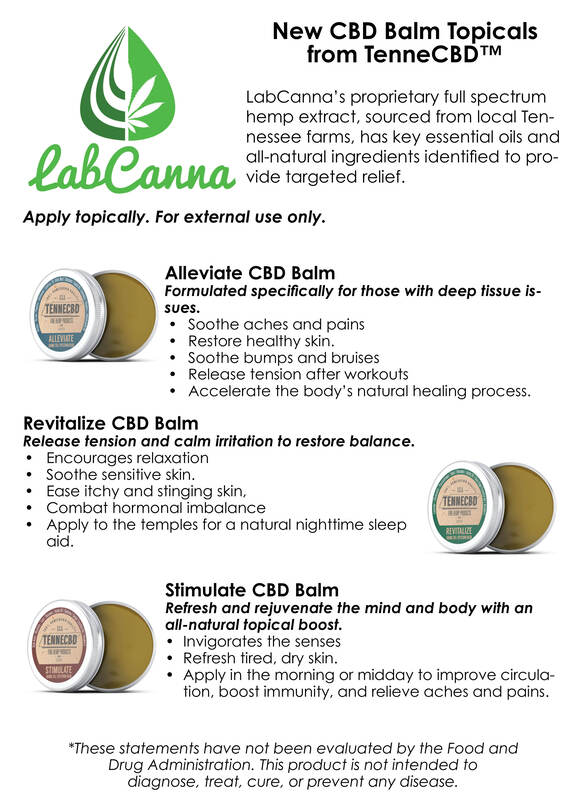 How Does CBD Oil Work?
All cannabinoids, including CBD, attach themselves to receptors in the body, known as CB1 and CB2. CB1 receptors are found primarily in the brain and deal with coordination and movement, pain, emotions, mood, thinking, appetite, memory, and other functions. THC attaches itself to CB1 receptors, which is why using marijuana can make you uncoordinated, affect your short-term memory and give you “the munchies.” CB2 receptors are found most often in the immune system. They have an affect on inflammation and pain. Scientists previously believed that CBD acted on CB2 receptors, but they now know that CBD does not act on either receptor directly. Believe it or not, the human body produces certain cannabinoids on its own. Scientists now think CBD influences the body to use more of those cannabinoids by freeing the receptors and blocking the enzyme FAAH, allowing the body to “self-repair” in a sense.

Anti-Seizure
One of the most well-known benefits of CBD oil is its ability to stop seizures. It has even been known to save lives. The Epilepsy Foundation says that CBD “has shown some positive effects on certain body systems and may potentially affect seizures.” The group fully supports CBD and medical cannabis, and backs “lifting federal barriers to research on cannabis and CBD.”

Depression and Anxiety Relief
Many people who use CBD oil find that it’s an effective treatment for anxiety. Scientists believe this is because CBD changes the way the brain’s receptors respond to serotonin, a chemical linked to mental health.

Neuroprotective
Researchers are studying the CB1 receptors in the brain to learn about the ways in which CBD could help people with neurodenerative disorders, which are diseases that cause deterioration of the brain and nerves over time. Scientists believe CBD might be useful in treating Alzheimer’s disease, multiple sclerosis (MS), Parkinson’s disease, and stroke. CBD may reduce the inflammation that can make the symptoms of these conditions worse, but more research is needed.

Chronic Pain Management
You probably already figured out by now that CBD’s anti-inflammatory powers also make it a potent painkiller. In a 2015 study published in the European Jounal of Pain, researchers applied a topical gel containing CBD to rats with arthritis for 4 days. At the end of the experiment, the team saw a marked decrease in inflammation and signs of pain in the rodents.

Fights Cancer
According to the National Cancer Institute (NCI), CBD and other cannabinoids may be useful in treating the symptoms of cancer, the side effects of cancer treatment, and cancer itself. When doctors recommend cannabis to cancer patients, it is usually to treat pain, improve sleep, and stimulate appetite.

How Much Do I Take? Can I Overdose?
You can take as much as you need. Start out with about 10 drops (.5 ML) in the morning and 10 drops (.5 ML) at night and increase dosage amount as needed. You cannot overdose. For the Green Formula 1 ML equals 20 MG, Black Formula 1 ML equals 60 MG. Most customers report that between 20 – 60 MG per day is effective for most uses. CBD has a 7-9 hour half-life, so we suggest taking twice daily in order to provide all day symptom relief.

Will it make me fail a drug test?
​The short answer? No. Only a metabolite produced from THC, or Tetrahydrocannabinol, is tested for in a drug test. CBD is a completely different molecule and does not cause the body to produce this metabolite in meaningful amounts. Whole-plant, or full-spectrum CBD oils do contain trace amounts of THC, but in such small amounts, much larger quantities would have to be consumed in order to approach the limits of current tests.

How is CBD derived from the plant?
LabCanna uses a closed loop Supercritical CO2 extraction process that creates phase changes in carbon dioxide utilizing very cold temperatures and high pressure. In liquid form, the CO2 acts as a solvent, removing the desired components from the plant. Next, a winterization process removes the fats and lipids and all residual solvents are removed. Finally, a complex distillation process is used to isolate individual compounds such as CBD.

Will CBD oil interact with any of my medications?
CBD oil may interact with the thecytochrome P450 enzyme system. Found within the liver, the cytochrome P450 enzyme system is responsible for metabolizing potentially toxic compounds, including over 60% percent of any drugs you have consumed. According to Davis’s Drug Guide, this system contains more than 50 enzymes that process and eliminate toxins. Cannabidiol can inhibit the cytochrome P450 system’s ability to metabolize certain drugs, leading to an overall increase in processing times. Interestingly, CBD oil is not alone in its effect on drug metabolism. Grapefruit, watercress, St. John’s Wort, and goldenseal all have a similar impact in terms of CYP450 inhibition. When the CYP450 system is impacted in this way, it leads to higher levels of certain drugs in your system at one time. This can cause unwanted side effects, and sometimes, an overdose.

If you are taking a medication affected by cannabidiol, you should consult your doctor to make sure that it is safe for you to supplement your personal care routine with CBD oil. From there, the two of you may consider adjusting the dosage on your medications so that you can use both products safely.

*These statements have not been evaluated by the Food and Drug Administration. These product are not intended to diagnose, treat, cure, or prevent any disease. If you have any medical condition or are taking pharmaceutical drugs, consult your doctor before use. Always consult with your doctor before starting a new dietary supplement program.